[Updated October 2017 with a dodecahedron video]

A CNC machine moves in 3 axes: X, Y, and Z. A "4th axis" adds rotation, allowing the machine to spin and cut the material. It's kind of a cross between a CNC machine and a lathe. 4th axis machining is really cool, but also expensive. A 4th axis attachment for my machine costs $800. Fortunately, a clever guy online had an idea for a DIY version. I set about making my own version of his idea.

Because I don't want to permanently modify my machine for this, I started by making attachments that will clamp on the machine's supports. All of the pieces are made with black HDPE plastic, generously provided by a friend of mine. It's the sort of plastic used in soda bottles, grocery bags, and my CNC machine. 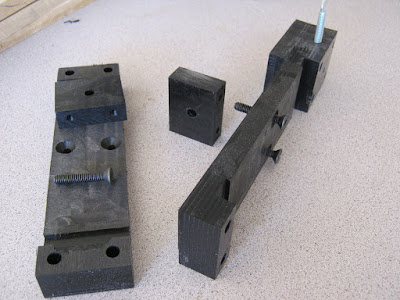 Thanks to the dust boot from an earlier project, there was far less mess to worry about this time. You can see the minimal cleanup remaining after milling away this pinion from a large square of HDPE that originally went clear out to the blue tape. 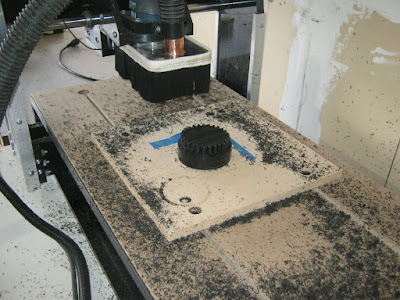 I wanted the 4th axis to accommodate pieces of varying lengths so I wouldn't be stuck milling two linear feet of wood for each project. The slider below makes that possible by shifting to the length of the material. 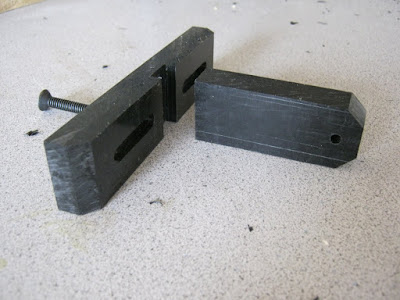 When it's all put together, the assembly hold a piece of wood directly under the CNC's router. As the CNC machine moves back and forth, the rack and pinion cause the workpiece to spin. It's a clever system, really, provided the designed remembers that all text and design will come out backwards thanks to the gearing. 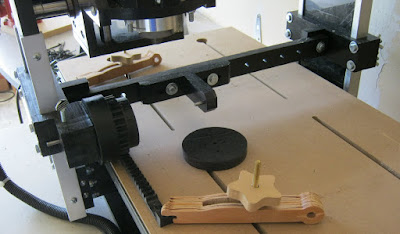 This is probably as difficult to visualize as it is to explain, so have a look at these videos. The first video shows the inaugural run making a simple cylinder with an indentation. I was very nervous that something would go terribly wrong (nothing works on the first try!), but it actually came out well.

For my second attempt, I made a fun spiral. It's much faster, thanks to a wider, more aggressive bit. Because of a design error I made, the spirals don't perfectly match up, but they're pretty close.

It works! I need some practice and tinkering time to understand how to use it well, but I have a few ideas planned. 3D carving might be really cool with this.

(October 2017 update) My next trial was an interesting 3d object: a 60-sided dodecahedron.

Search for a Project